Okay, not so good with the blogging...

I'll admit, blogging always seems like a better idea on paper. It's like exercise; some people are dedicated to it and never miss the chance, and some people, like me, keep intending with sincere determination to do it, and then something (life) gets in the way.

So I apologize for not being so good about this. I may have to punt on the whole blog thing.

If you're on Facebook I have an author page and I do post things there, and that has pretty much taken the place of the blog. So, if you also do the Facebook thing I would encourage you to follow my page by clicking here.

Also, I would encourage anyone interested in my books to sign up for my newsletter by clicking here.

I won't bombard you with stuff. I'll be sending one out every month or so. It will have announcements of upcoming events, new releases and sample chapters and short stories that will only be available to people who have signed up.

Thanks for visiting my admittedly less than inspirational blog!
Posted by Jim Nelson at 7:53 AM 1 comment:

Coming to a Major On-Line Retailer Near You!

The publication date is set!

March 28 will be the launch date for the third book in the Norsemen Saga: 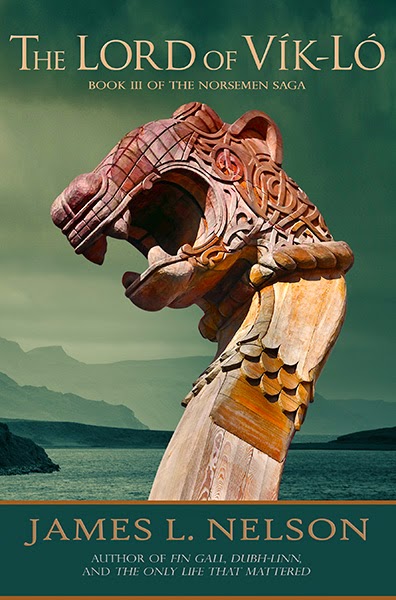 Having recovered from the wounds of battle, and having won for himself a fortune, a crew, and a longship, Thorgrim Night Wolf makes ready to leave the Viking town of Dubh-linn for the long journey back to his home in Norway. But the gods have other plans, and Thorgrim and his men wash up in the small Viking longphort of Vík-ló. Thinking themselves among friends, they soon learn that the opposite is true, that Grimarr Giant, the Lord of Vík-ló, has reason to want Thorgrim and his son Harald dead. In a world where they cannot tell friend from foe, a world of violence at sea and on land, Thorgrim, Harald, Ornolf, Starri and their band of Norsemen find themselves once again fighting not just for plunder, but for their very survival.

"James L. Nelson's Viking Sagas are a tour de force of tautly crafted twists, turns full of authentic detail, and plots that drive you to the finish!"
- Dewey Lambdin
Author of The Alan Lewrie Naval Adventures

The Lord of Vik-lo: Book III in The Norsemen Saga

Once again trying to sail from Dubh-linn to his home in Norway, Thorgrim Night Wolf's ship sufferes damage that forces him into the longphort of Vik-lo and more danger than even the sea had presented.

Thorgrim Night Wolf and his Viking band continue to plunder Medieval Ireland as the Irish fight one another and the Norsemen as well. Despite his desire to return to his native Norway, Thorgrim is once again swept up in the intrigue of those who would rule Ireland.

Book One of The Norsemen Saga - set in Ireland in the 9th Century, Fin Gall is the story of Viking Thorgrim Night Wolf and his band, who come to raid the Irish coast and end up entangled in the locals' struggle for power.

With Fire and Sword

The Story of the Battle of Bunker Hill

(and a square-rigged pumpkin)