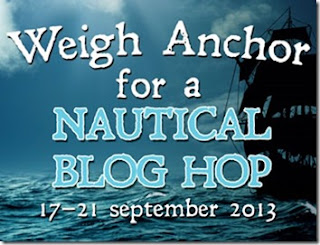 When last we saw our unlikely hero (that would be me) he was living aboard a Newport 27 (sailboat) in Marina Del Rey, sick of the Los Angeles scene but unsure what to do next. Then, one fateful morning, he read about the imminent arrival of the replica Golden Hinde II. 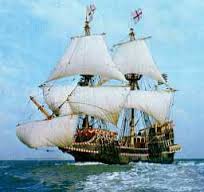 Reading about this sailing ship, I realized that this is what I had always wanted to do (notice the subtle transition from third to first person? Writer's Tip #2: Don't do that, it's actually pretty awkward.)

Which leads to Writer's Tip #3: Don't try writing, as I am doing, before your first cup of coffee.

Where the hell was I?

Oh, yeah. So the day the ship comes in I took a long lunch from the TV production company I was working at and went down to see her arrive. Magnificent. What a beautiful ship, coming in with those big topsails set, guns firing. Then I look down on the dock, and there is this beautiful woman dressed in 16th Century sailor garb, her great mop of hair done up in a bandanna, pistol in her belt. (For more on women going to sea - in the bad old days - see Linda Collison's terrific article on her blog) For some reason it had not occurred to me there would be women on the crew. This lovely creature had come in on the support vessel and was standing by to catch dock lines. 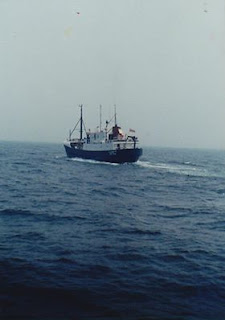 Wow! thinks I. And even as I write this, that lovely woman, Lisa, is now making lunch for our four kids on the other side of the house and getting them ready for school. So girls, let this be a lesson to you. Not sure what the lesson is, but let it be a lesson...

Beautiful women, beautiful ship, what's not to like? I didn't even know where the ship was going, but I talked with the owner and he said to come by the next day for an interview. Next morning, early and as bright as I get, I stepped into the office aboard the support ship Sea Surveyor and saw a schedule board on the wall with "Los Angeles" blocked out for a few weeks, then "San Diego" for a month and then "Panama Canal Trip" for two months and I thought Yesssssss!!!

The Hinde was (is) a beautiful ship. She was built by traditional shipwrights in Appledore, England and launched on April 5, 1973 (my eleventh birthday. Coincidence? I think not) She was sailed to San Francisco for the 400th anniversary of Drake's having landed in that area and then no one knew what to do with her. She hung around the Bay Area for a while and then in 1979 she sailed across the Pacific to appear in the TV miniseries Shogun  (you date yourself if you admit to remembering that one). Then she returned to England where she festered in a marina for years until the marina owner, Roddy Coleman, bought her and took her back to the US for a five year tour. That's when I joined her, under the ownership of the notorious Roddy. 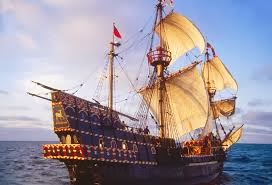 Under the heading of "Youth is wasted on the young" I was way to inexperienced to appreciate what a great ship she was, so authentic in every detail. She even smelled the part with copious amounts of pine tar. Despite my lack of square rig experience I was made boatswain a few months after joining. Lisa wanted the job, but I got it. That's when she swore she would marry me and make me pay for the rest of my life.

We sailed from San Diego in October of 1988 and transited the canal. Beautiful as the ship was, she was the slowest vessel and the poorest sailor, with the most unkindly motion at sea of any vessel I have been on. I recall being passed by a massive oil tanker on the approaches to Panama. They radioed over and informed us they were nine days out of Alaska. We told them we were twenty-eight day out of San Diego. Slow boat. 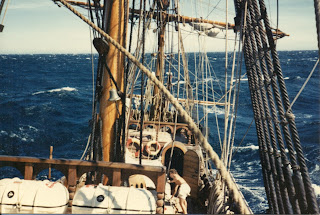 The Hinde in heavy weather in the Gulf of Tehuantepec in Mexico
Finally got into Brownsville, Texas, in December, 1989. My intention had been to sail with the Golden Hinde for six months, get the whole sailing thing out of my blood, and go back to resume my career in Hollywood. Instead, I was gone for a year, and when I did finally return to Los Angeles it was to sell everything I owned, pack up the motorcycle and head off to the next ship. 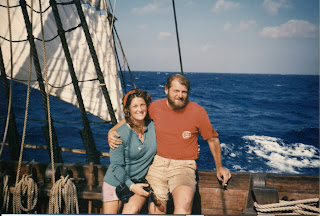 Me and Lisa aboard the Hinde. She's wearing my shirt. I've know the girl
for a month and a half and already she's stealing my clothes.
The sailing bug was far from cured.
Next post (when I get back from a quick trip to New York): :Lady Washington
﻿
Posted by Jim Nelson at 5:32 PM

The Lord of Vik-lo: Book III in The Norsemen Saga

Once again trying to sail from Dubh-linn to his home in Norway, Thorgrim Night Wolf's ship sufferes damage that forces him into the longphort of Vik-lo and more danger than even the sea had presented.

Thorgrim Night Wolf and his Viking band continue to plunder Medieval Ireland as the Irish fight one another and the Norsemen as well. Despite his desire to return to his native Norway, Thorgrim is once again swept up in the intrigue of those who would rule Ireland.

Book One of The Norsemen Saga - set in Ireland in the 9th Century, Fin Gall is the story of Viking Thorgrim Night Wolf and his band, who come to raid the Irish coast and end up entangled in the locals' struggle for power.

With Fire and Sword

The Story of the Battle of Bunker Hill

(and a square-rigged pumpkin)